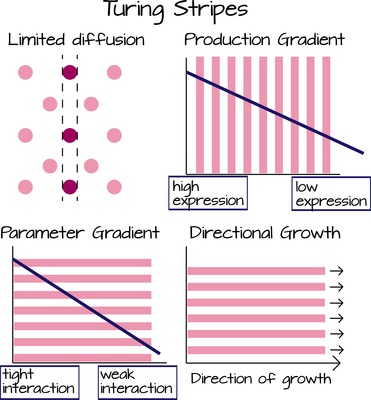 In a very long and narrow tissue, there is only one direction diffusion can occur and this converts the Turing spot pattern into a stripe pattern. Similar forces, like directional growth and a morphogenic gradient, can also convert the spot pattern into stripes2. Without an external force, the default should be spots or a meandering labrinthine pattern, depending on the properties of the activator and inhibitor. Hiscock and Megason propose four main ways to get a stripe pattern. Besides making diffusion more likely in one direction than another, a tissue can be subject to a "production gradient." This gradient is a protein or transcriptional/translational cofactor that causes higher gene expression of both the activator and inhibitor on one side of the tissue. Computational models predict that this type of gradient causes stripes to orient themselves perpendicular to the gradient. Stripes will orient parallel to a "parameter gradient," where the activating and inhibitory properties of the two proteins are higher at one end of the tissue than the other. This type of modification could be produced by a gradient of a protein or cofactor that binds to the activator and both prevents it from activating gene expression and from being inhibited by the inihbitor. Finally, the tissue can grow directionally. For example, your limbs developed largely by growing away from your body (distally), with a much slower rate of growth in other directions. This is due to the AER at the distal-most part of the limb bud causing cell proliferation underneath it. A computational model shows that a reaction-diffusion Turing model will generate stripes parallel to the direction of tissue growth.