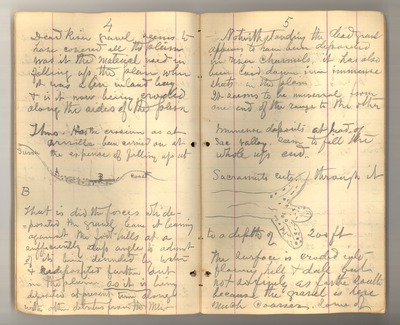 5 Notwithstanding the dead gravel appears to have been deposited in river channels, it has also been laid down in immense sheets in the plain It seems to be universal from one end of the range to the other

Immense deposits at head of Sac [Sacramento] Valley seem to fill the whole up end. Sacramento cuts through it to a depth of 200 ft [sketch] The surface is eroded into [flowing] hill & dale but not so finely as farthe south because the gravel is here much coarser. Some of