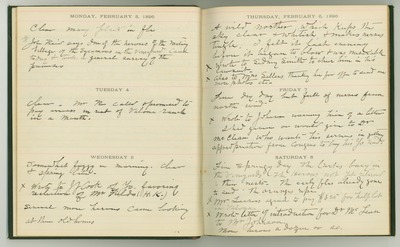 Clear many plants in flrs [flowers]

Clear. Mr R called & promised to pay arrears in rent of Valona Ranch in a month.

A wild norther which keeps the sky clear & whitish, & makes nerves tingle. I felt it last evening before it began to blow & was miserable

X Wrote to Sidney Smith to cheer him in his lawsuit.

X Also to Mrs Sellers, thanking her for offer to send me more photos etc.

Fine dry day but full of nerves from north wind

X Wrote to Johnson warning him of a letter I had given or would give to Dr Mc Clean who wants his services in getting appropriation from Congress to buy his Yo [Yosemite] [road].

Fine springy day the larks busy in the vineyards. The herons not yet returned to their nests. The early flrs [flowers] already gone to seed. The oranges ripen

X Mr Larsens agreed to pay $325 for half lot in Valona.

More herons a dozen or so.