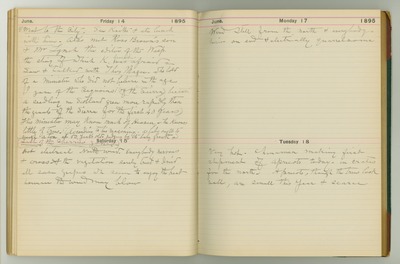 June Friday 14, 1895 Went to the city. Saw Keith & ate lunch with him. Also met Ross Brown’s son & Mr. Lynch the editor of the Wasp. the sting of which K [Keith] [was afraid] feared. Saw & talked with Thos [Thomas] Magee who told of a minister who did not believe in the age I gave of the Sequoias of the Sierra because a seedling in Scotland grew more rapidly than the giants of the Sierra for the first 40 years. This minister may Know much of Heaven, he knows little of trees. According to his reasoning a baby ought to weigh a ton at 50 years old. Judging by its baby growth. Last of the cherries gone.

Saturday 15 Hot electrical North wind. Everybody nervous & cross & the vegetation sorely tried & dried [all] same grapes wh [which] seem to enjoy the heat however the wind may blow.

Tuesday 18 Very hot. Chinamen making first shipment of apricots today, in crates for the north. Apricots, though the trees look well, are small this year & scarce.