Home > All Reminiscences of John Muir > 63 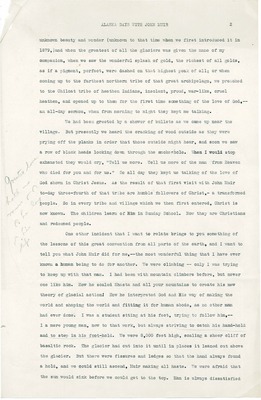 ALASKA DAYS V7ITH JOHN BEJIB 2 unknown beauty and wonder (unknown to that time when we first introduced it in 1879,)and when the greatest of all the glaciers was given the name of my companion, when we ^ saw the wonderful splash of gold, the richest of all golds, '■ as if a pigment, perfect, were dashed on that highest peak of all; or when coming up to the farthest northern tribe of that great archipelago, we preached to the Chilcat tribe of heathen Indians, insolent, proud, war-like, cruel heathen, and opened up to them for the first time something of the love of G-od,— an all-day sermon, when from morning to night they kept me talking. We had been greeted by a shower of bullets as we came up near the village. But presently we heard the cracking of wood outside as they were prying off the planks in order that those outside might hear, and soon we saw a row of black heads looking do van through the smoke rhole. 'fihen I would stop exhausted they would cry, "Tell us more. Tell us more of the man from Heaven who died for you and for us." So all day they kept us talking of the love of G-od shown in Christ Jesus. As the result of that first visit with John Muir to-day three-fourth of that tribe are humble followers of Christ,- a transformed people. So in every tribe and village which we then first entered, Christ is now known. The children learn of Him in Sunday School. Hot/ they are Christians and redeemed people. One other incident that I want to relate brings to you something of the lessons of this great convention from all parts of the earth, and I want to tell you what John Muir did for me,—the most wonderful thing that I have ever known a human being to do for another. We were climbing — only I was trying to keep up with that man. I had been with mountain climbers before, but never one like him. How he scaled Shasta and all your mountains to create his new theory of glacial action! How he interpreted G-od and His way of making the world and shaping the world and fitting it for human abode, as no other man had ever done. I was a student stting at his feet, trying to follow him,— I a mere young man, new to that work, but always striving to catch his hand-hold and to step in his foot-hold. Y7e were 8,000 feet high, scaling a sheer cliff of basaltic rock. The glacier had cut into it until in places it leaned out above the glacier. But there were fissures and ledges so that the hand always found a hold, and we could still ascend, Muir making all haste. We were afraid that the sun would sink before we could get to the top. Man is always dissatisfied