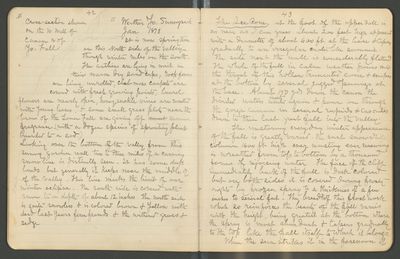 [sketch: Cross-section shown of the W [west] wall of Canon W [west] of Yo. [Yosemite] Fall]

It is now springtime on this North side of the valley though winter rules on the South. The antlions are lying in wait in their arm dry sand cups, rock ferns are being unrolled, club moss carpets are covered with fresh growing points, laurel flowers are nearly open, honeysuckle vines are rosetted with young leaves, & some small grass plots near the brow of the Lower Fall are giving off [sweet] summer fragrance (with a dozen species of sprouting plants bearded to a sod.)

Looking over the bottom of the valley from this sunny garden wall two to three miles of a curving snowline is distinctly seen. It has some deep bends but generally it keeps near the middle [of] of the valley. This line marks the limit of our winter eclipse. The south side is covered with snow to a depth of about 12 inches The north side is quite snowless & is colored brown & yellow with dead last years fern fronds & the withered grass & sedge

The Ice Cone at the foot of the upper Fall is as near as I can guess about 200 feet high at present with a diameter of about 600 ft. [feet] at the base & tapers gradually to an irregular crater like summit.

The side next the wall is considerably flattened

The whole of the fall in calm weather pours into the throat of this hollow truncated cone & escapes at the bottom by several jagged openings at the base. About 150 yds [yards] down the canon the divided waters meet unite again & pour on through the gorge canon in several rapids & cascades down to their last great fall into the valley.

The unstormy everyday winter appearance of the fall is greatly varied. The vast snow-white column 1600 ft [feet] high ever wasting ever renewing is wreathed from top to bottom by a thousand forms of rejoicing water The face of the cliff immediately back of the fall is dark colored but on both sides it is covered during frosty nights by frozen spray to a thickness of a few inches to several feet. The breadth of this frost work which so reinforces the beauty of the fall varies with the height, being greatest at the bottom where the spray is most abundant & tapers gradually to the top like the fall itself to which it belongs. When the sun strikes it in the forenoon it