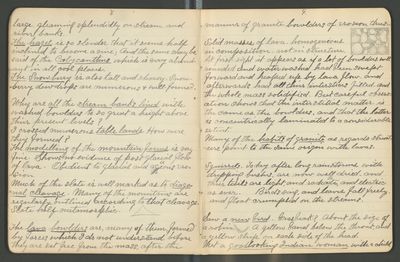 large, gleaming splendidly on stream and river banks. The hazel is so slender that it seems half inclined to become a vine, and the same may be said of the Calycanthus which is [very] abundant in all cool places. The Snowberry is also tall and showy. Snowberry dew drops are numerous & well-formed. Why are all the stream banks lined with washed boulders to so great a height above their present levels? I crossed numerous table lands. How were they formed? The modelling of the mountain forms is very fine. Shows no evidence of post glacial flow of lava. Obedient to glacial and aqueous erosion. Much of the slate is well marked as to diagonal cleavage. Many of the mountains are regularly outlined according to that cleavage. Slate half metamorphic.

The lava boulders are, many of them, formed by forces which I do not understand before they are set free from the mass, after the

[sketch of rocks and boulders fitted together]

Solid masses of lava, homogeneous in composition – not in structure. At first sight it appears as if a lot of bowlders [boulders] well rounded and water washed had been swept forward and heaped up by lava flow and afterwards had [all] their interstices filled, and the whole mass solidified. But careful observation shows that the interstitial matter is the same as the bowlders [boulders], and that the latter is concentrically laminated to a considerable extent.

Many of the habits of granite as regards structure point to the same origin with lavas. Squirrels. Today after long rainstorms with dripping bushes are now well dried and their tails are light and [radiant] and electric as ever. Birds sing, and leaves fall freely and float crumpled on the streams. Saw a new bird. Grosbeak? About the size of a robin [sketch] A yellow band below the throat and a yellow strip on each side of the head. Met a goodlooking Indian woman with a child