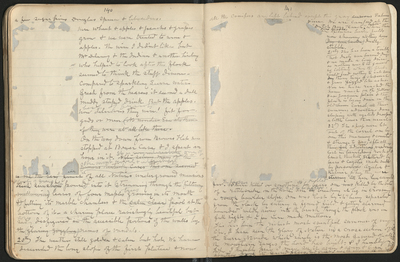 a few sugar pines douglas spruce & libocedrus. Here wheat & apples & peaches & grapes grow & we were treated to wine & apples. The wine I didn’t like but Mr. Delaney & the Indian & another hireling who helped to look after the flock seemed to think the stuff divine. Compared to sparkling Sierra waters fresh from the heavens it seemed a dull muddy stupid drink. But the apples, best of fruits, how delicious they were! Fit for gods or men [no wonder Eve ate them if they were at all like these]

On the way down from Browns Flat we stopped at Bower Cave & I spent an hour in it. It is [very interesting] one of the most novel & interesting [After seeing many of the famous Kentucky caves this one seemed to me the very finest] of all Nature’s underground mansions plenty of [free] [rich] sunshine poured into it (streaming through the [filtering mellowing]) leaves of four maple trees growing in its mouth [and] filling its marble chambers & the [calm clear] pool at the bottom of it a charming place ravishingly beautiful but are sadly disfigured on (the accessible portions of the walls by the [glaring goggling] names of vandals.

20th) The weather still golden & calm but hot. We have descended the long slope of the first plateau & now

all the conifers are left behind except the gray [curious] Sabine pine. We are camped at the “Dutch Boys Ranch” below where there are Pino Blanco are extensive barley fields now showing nothing save [dry sunbeaten] dusty stubble.

21st) This has been a terribly hot dusty sun burned day & we made a long drive as nothing was gained by loitering where the flock could find nothing to eat save [dry] thorny twigs of chapparal & grass frizzled like ashes. Now we have reached the home ranch on the yellow San Joaquin plain & the flock is lying down in their old [home] corral. All their summer adventures done sleeping with eyelids drooped a little lower than usual.

22nd) The sheep were let out of the corral one by one this morning & counted & strange to say, after all their [far] adventures wanderings, lost in [boulder] rocks & brush thickets, scattered by bears & coyotes, made sick by poisonous Azalea & Kalmia when they were starving, all have been accounted for. The losses [10] were killed or smothered 10 killed by bears, one [was] killed by the bite of a rattlesnake on the move that had to be after One breaking its leg in crossing a rough boulder slope. One was lost by its being separated from the flock by entering a fenced field & getting alarmed bounded wildly away into the brush though the flock was in full sight & a few were made mutton.

This has been the richest most eventful summer of my life. I have seen (the glory of Nature in) a cross section of the mountain ranges the Lord has built & I humbly hope I humbly pray I may see it again & again & learn something from its sacred pages. God grant I may be allowed to study this book.