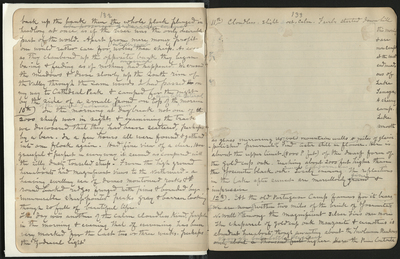 Back up the bank then the whole flock plunged in headlong at once s if the river was the only desirable part of the world. [like possessed by adoring service] Apart from mere money profit one would rather care for intelligent wolves than sheep. As soon as they clambered up the opposite bank they began ba-ing & feeding as if nothing unusual had happened. We crossed the meadows & drove slowly up the south rim of the valley through the same woods I had passed [the] on my way to Cathedral Peak & camped for the night by the side of a small pond on top of the main left lateral of the ancient Tuolumne Glacier moraine.

10th) In the morning at daybreak not one of the 2000 sheep was in sight & examining the track[s] we discovered that they had been scattered, perhaps by a bear. In a few hours all were found & gathered into one flock again. Had fine view of a deer. How graceful & perfect in every way it seemed as compared with the silly dusty tousled sheep. From the high ground hereabouts had magnificent views to the northward. A heavy swelling sea of domes moutoneed rocks & round backed ridges fringed with pines & bounded by innumerable sharp pointed peaks gray & barren looking though so full of beautiful life.

This day is [was] another of the calm cloudless kind, purple in the morning & evening that of evening has been very marked for the last two or three weeks perhaps the “Zodiacal light”

11th) Cloudless, still, [frost], calm. Fairly started downhill this morning & are now camped at the west end meadows of Lake Tenaya. A charming camp. Lake smooth as glass mirroring its miles of glacier polished pavement & bald mountain walls [&]. Find Aster still in flower. Here is about the upper limit (8000 ? feet) of the dwarf form of the goldcup oak reaching about 2000 feet higher than the Yosemite black oak. Quercus Californicus Lovely evening. The reflections in the lake after sunset are marvelously fine [grand] & impressive.

12th) At the old Portuguese Camp famous for its bears [we are now] within two miles of the brink of Yosemite’s [N. Wall] among the magnificent silver firs once more. The chapparal of goldcup oak manzanita & ceanothus is abundant hereabouts though awanting about the Tuolumne Meadows though but little higher [only about a thousand feet] higher. Here the pinus contorta