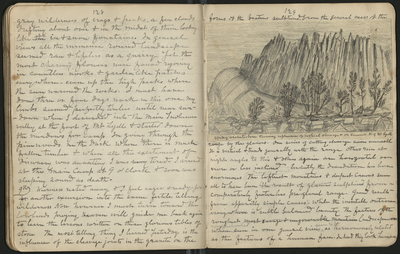 gray wilderness of crags & peaks, a few clouds drifting about over & in the midst of them looking like [thi] ice & snow fountains. In general views all the immense round landscape seemed raw & lifeless as a quarry yet the most charming flowers were found rejoicing in countless nooks & garden-like patches everywhere – even up the high peaks where the sun warmed the rocks. I just have done three or four days work in this one. My limbs seemed perfectly tireless until near sundown when I descended into the main Tuolumne Valley at the foot of Mt. Lyell & started down the meadows for camp. In going through the pine woods in the dark when there is much fallen timber & when all the excitement of discovery was awanting I was [very] tired. I arrived at the main camp at 9 o’clock & soon was sleeping sound as death.

9th) Weariness rested away & I feel eager & ready for [for] another excursion into the same fertile telling wilderness. Now however I must to toward the lowlands praying Heaven will guide me back again to learn the lessons written on these glorious tables of stone. The most telling thing I learned yesterday is the influence of the cleavage joints in the granite on the

forms of the features sculptured from the general mass of the

range by the glaciers. One series of cutting cleavage seems universal. It is vertical & trends generally with the range. Other run at right angles to this & others again are horizontal on more or less inclined. Evidently the denudation has been enormous. Trans or omit ((The loftiest mountains & deepest canyons seem all to have been [the result of glaciers] sculptured from a comparatively featureless pre-glacial range. Grand results from apparently simple causes.)) While the inevitable outcome [everywhere] is subtle balanced beauty. The features of the roughest [most savage & ungovernable mountain] landscape [are when sun] complemented in [one] general views seem to be as harmoniously related as the features of a human face. Indeed they look human