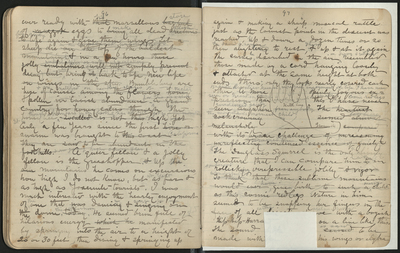 ever ready with his [that] marvelous store [bagful] of [maggot] eggs to make all dead flesh fly away [creatures to life again & give them wings. Let a sheep die on the top of the baldest mountain & in hours these jolly embalmers undertakers or rather uppertakers] will not simply prevent decay but will bring the dead body back to life, new life on wings in the sky.] Bumblebees are here & are well fed on boundless stores of nectar [of course among the flowers honey] & pollen [in lavish abundance for this is a rich/a grand country for honey eaters though] The honey bee through abundant in the foothills has not yet got so high [in the mountains] [so called is not this] [Yet] It is only a few years since the first [hive or] swarm was brought to [this coast] California. [They are said to be abundant in the foothills & are going higher every year.] A queer fellow & a jolly fellow is the grasshopper. [and] Up the [our] mountains he comes on excursions how high I do not know, but at least as far & as high as Yosemite tourists. I was much interested with the hearty enjoyment of the one that [was] danced[ing] & sang [singing] for me on the dome this afternoon [today]. He seemed brim full of hilarious energy [which he] manifested by springing into the air to a height of 20 or 30 feet, then diving & springing up

again & making a sharp musical rattle just as the lowest point in the descent was reached. Up & down a dozen times or so he danced & sang. Then alighted[ng] to rest then [and] up & at it again The curves he described in the air in diving & rattling resembled those made by a cord hanging loosely & attached at the same height at both ends thus [sketch: rattleline, ground] only the loops nearly covered each other. Braver, heartier, keener, carefree enjoyment of life I have never seen or heard in any creature. [A more openly joyous expression than this I have never seen anywhere [from anybody] The mountain’s merriest child. [The heartiest cockcrowing seemed almost melancholy compared with its brave challenge of unreasoning unreflecting seemed the condensed essence of gaiety] The Douglass Squirrel is the only living creature that can compare him [with] in exuberant rollicking irrepressible jollity [& vigor] [wanderlust] [To think that these sublime mountains would ever have given birth to such a merry child as this comic redlegs.] Nature in him seemed to be snapping her fingers in the face of all earthy [cutout] melancholy with a boyish hip -hip hooray…on a line like this. The sound…is said [seemed] to be made with…his wings or elytra