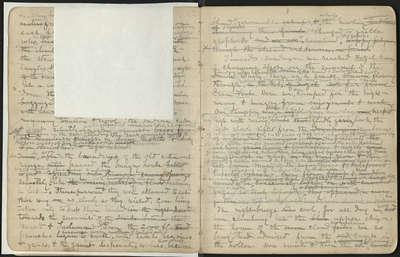 [As Soon] As soon [after] as the boundaries of the old eaten out range [were] was passed the hungry horde [halted to feed spreading out through sunny openings smoothly] suddenly became calm like [the tossing waters of a flood] a mountain stream entering a lake. Thenceforward they were allowed to eat their way [on] as slowly as they wished, care being taken only to keep them headed [in the right direction] towards the summit of the [divide between the] Merced & Tuolumne divide. Soon the 2000 flat[tened] paunches [began to swell] [became] were swollen & bulged [out] with sweet pea vines & grass & the gaunt desperate creatures more like wolves than sheep became

bland & governable [sheep & the] while howling [dervishes] [hoodlums threatening their flocks] [of] drivers changed to gentle shepherds [and we all] & sauntered in peace [happy pilgrims through the blessed wilderness in peace].

Towards sundown we reached Hazel Green, a charming spot on the summit of the [divide] dividing ridge between the basins of the Merced & Tuolumne, where there is a small [stream] brook flowing through hazel & dogwood beneath magnificent silver firs & pines [a thickets of hazel not far from Crane Flat]. Here we are camped for the night weary & hungry [from enjoyment & work]. Our big campfire [was like a big] is blazing like a sunrise [one heaped] heaped high with [rosing] logs & branches [limbs that ] gladly giving back the light slowly sifted from the [downpouring] sunbeams [of a hundred summers. How] of centuries of summers & in the glow of that old sunlight how impressively surrounding objects are [were] brought forward in relief against the outer darkness! Grasses, larkspurs, columbines, lilies, hazel bushes & the great trees formed a circle around the fire like thoughtful [admiring] spectators gazing & listening with human-like enthusiasm. [the arching grass leaves & larkspurs & hazels were brought out in relief in the vivid glow & the tall brown masts of the sugar pines & outspread tasseled branches, every flower & leaf & tree needle seemed to be consciously looking on with concentered gaze, so truly life like & enthusiastic they appeared in every feature now that all the world beside was shut out in darkness.]

The night breeze [was] is cool, for all day we have [had] been climbing into the [blue] upper sky, the home of the [moon] cloud mountains [piles] we so long have [had] admired from the [old] camp in the hollow. How sweet & keen the air, every breath a [reviving] blessing [seems]