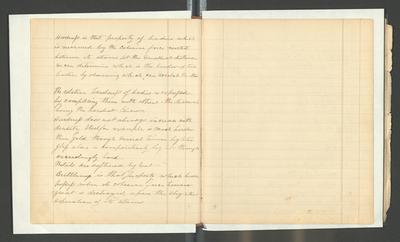 Hardnefs [Hardness] is that property of bodies which is measured by the cohesive force exerted between its atoms at the smallest distances we can determine which is the harder of two bodies by observing which can scratch the other.

The relative hardnefs [hardness] of bodies is exprefsed [expressed] by comparing them with others, the diamond being the hardest known.

Hardnefs [Hardness] does not [always] increase with density. Steel for example is much harder them gold though several times lighter glafs [glass] also is comparatively light though exceedingly hard.

Metals are softened by heat.