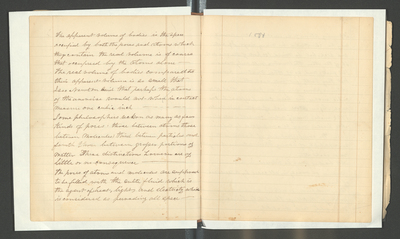 The apparent volume of bodies is the space occupied by both the pores and atoms which they contain the real volume is of course that [occupied] by the atoms alone. The real volume of bodies compared to their apparent volume is so small that Isac [Isaac] Newton said that perhaps the atoms of the universe would not when in contact measure one cubic inch.

Some philosophers reckon as many as four kinds of pores, those between atoms those between molecules, third between particles and fourth those between [grofser] [grosser] portions of matter. These distinctions however are of little or no consequence.

The pores of atoms and molecules are supposed to be filled with the subte [subtle] fluid which is the agent of, heat, light, and electricity which is considered as pervading all space.