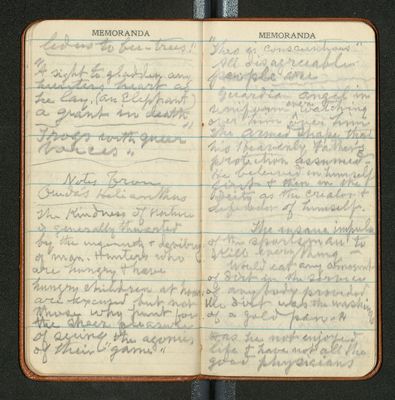 led us to bee trees”

The kindness of nature is generally thwarted by the ingenuity & devilry of man. Hunters who are hungry & have hungry children at home are excused, but not those who hunt for the sheer pleasure of seeing the agonies of their “game”

“Theo is conscientious” All disagreeable people are.

Guardian angel in uniform ever watching over him over him. The armed shape that his Heavenly Father’s creation assumed. He believed in himself first & then in the Deity as the creator & defender of himself.

The insane impulse of the sportsman to kill everything – Would eat any amount of dirt in the services of anybody provided. The dirt was the washing of a gold pan”

Has he not enjoyed life & have not all the good physicians