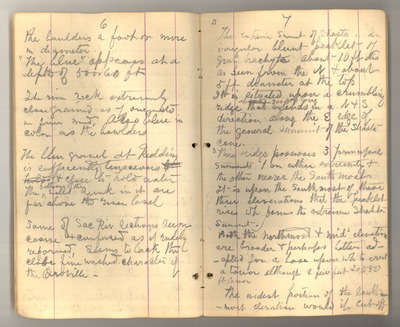 6 the boulders a foot or more in diameter. "The blue" appears at a depth of 50 or 60 ft The rim rock extremely close grained as if [originated] in [firm] mud. Also blue in color as the boulders The [blue] gravel at Redding is sufficiently tenacious [to hold] close to hold water The bottom of the wells sink in it are far above the river level Some of Sac Riv [Sacramento River] sections seem coarse & confused as if rudely reformed, seems to lack the close fine washed character of the Oroville.

7 The extreme summit of Shasta is an irregular blunt peaklet of gray [trachyte] about 10 ft dia [diameter] as seen from the N [North] & about 5 ft diameter at the top It is situated upon a crumbling ridge about 200 yds long that extends in a N & S direction along the E edge of the general summit of the Shasta cone. This ridge possesses 3 principal summits 1 on either extremity & the other nearer the south most It is upon the south most of these three elevations that the peaklet rises wh [which] forms the extreme Shasta summit. Both the northmost & mid elevations are broader & perhaps better adapted for a base upon wh [which] to erect a tower although a few feet 20 to 50 ft lower The widest portion of the southmost elevation would it cut off