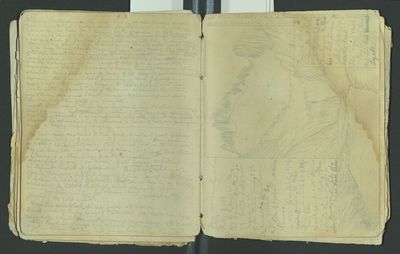 When my observations on this most interesting gl [glacier] were finished it was near sunset & I had to make a dash for the bottom of the mtn [mountain] at least as low as trees, yet I lingered in the grandeur of the landscape I was on the summit of the pass Ritter Lake with its snowy crags & banks & many a wide gl [glacier] fountain beyond rimmed with pks [peaks] the wind making stern music among [their] thousand spires the sky with grand [openings] in its huge black clouds openings jagged walled & steep like the passes of the mtns [mountains] beneath them, E [East] ward lay Islet lake with its countless little rocky isles. To the left the splendid architecture of Mammoth Mtn [Mountain] & in the distance range on range of mtns [mountains] yet unnamed with [Mono] plains & lake & volcanic cones, sunlit & warm between

My feet soon awakened to their work a mile of rock leaping on angular slopes of water washed moraine soon came in sight of wind-bent P. flexilis that insured fire for the night my feet soon felt soft cushions of carex & I saw here & there a daisy & a stone fringed with Bryanthus

Descended a long icy névé felt weary & halted in the first thicket of flexilis. The wind blew wildly all through the night. hedged myself & fire round with boughs to deaden the blows of the wind that came down in craggy avalanches. The outlet of a little gl [glacier] sends down its stream over a precipice near by for music that is heard in the pauses of the wild wind

A new bird came to look at me just at dark

The largest & most interesting of these are the [two] nearest Lyell

SE [Southeast] countless peaks with many a gl [glacier] of the Ritter group, 3 gls [glaciers] [are] visible on the mtns [mountains] between Rit [Ritter] & Matt [Matterhorn] [2] on the S [south] the Can [Canyon] of Joaquin with domes & bosses

[A] circle of lakes near base