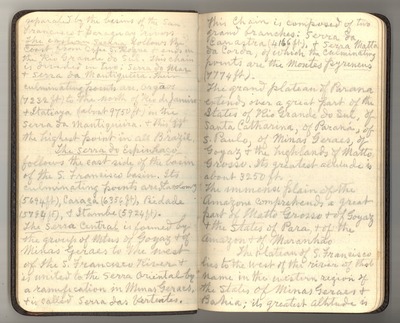 separated by the basins of the San Francisco and Paraguay Rivers. The Eastern Sierra follows the coast from Cape St. Roque, and ends in the Rio Grande del Sul. This chain is divided in two, the Sierra de Mar and Sierra de Mantiquiara. Their culminating points are Orgaos, 7, 232 feet high to the north of Rio de Janeiro, and Itatiaya, about 9,150 feet. In the Sierra De Mantiquiara, and this last is the highest point in all Brazil. The Serra do Esphiuhaco follows the east side of the basin of the San Francisco. Its culminating points are Itacolomy, 5,694 feet. Caraca, 6,356 feet. Piedade, 5,794 feet, and Itambe 5,924 feet. The Serra Central is formed by the group of mountains of Goyaz and of Minas Geraes to the west of the San Francisco River, and is united to Serra Oriental by a ramification in Minas Geraes and is called Serra Bertentes. This chain is composed of two grand branches, Serra Canastera 4,16 feet, and Serra Mattodacorda, of which the culminating points are the Montes Pyreneus 7,774 feet. The grand plateau of Parana extends over a great part of the state of the Rio Grande del Sul, of Santa Catarina, of Parana, of Sao Parlo, of Mines Geraes, of Goyaz, and the highland of Mattogroso. Its greatest altitude is about 3,350 feet. The immense plain of the Amazon comprehends a great part of Mattogroso and of Goyaz, and the States of Para and the Amazons and of Maranhao. The plateau of San Francisco lies to the west of the river of that name. In the western region of the State of Minas Garaes and Bahia. Its greatest altitude is