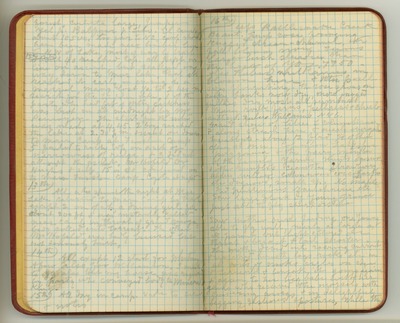 forest, Contorta large, Juniper Yel p. [Yellow pine] Balfour p. [Balfour pine] Libo. El [elevation] camp about 10500, too far to NE [northeast], camp should have been made near timber line to NW of Lake, most of way to trail

12th July About 40 reached top. All pepl [people] in line on ascent, but scattered on way down to Mor [Moraine] lake. That all reached it early in evening is a marvel, many lost ½ to 2 hrs in search for hidden lakes, 1 of the party who had fit of mtn [mountain] sickness was brot [brought] in at midnight by Mr [Penroyer]. The start for the mtn [mountain] was made at 4:45. 2 boys reached the lake at 2:30 pm. and went on down to main camp at Funston Camp. 5 failed to reach top on acct [account] of narrowness of ridge - & 3 did not attempt the ascent, Mr [Hofeld] Dr Hughes & self, 15 or so continued on to main Funston Camp. Coyotes at night

13th All who spent the night at Mor [Moraine] Lake returned to main camp by trail except one of wh [whom], a daring girl fell about 200 ft and was instantly killed near camp in [the water] at grand arroya body rolled into torrent. The other Mr [Hofeld] was badly bruised but not seriously hurt.

[Note: Moraine Lake lies just east of a ridge that drops steeply down into the canyon formed by what is now known as Big Arroyo. The Funston meadows lie east of Moraine Lake.]

14th All except 12 start for Whitney [Mt. Whitney, at 14,494 feet the tallest peak in California, currently located at the eastern border of Sequoia National Park] & few also for Williamson [Mt. Williamson, 14,375 feet tall and north of Mt. Whitney], I [meant] to go also but my horse was required by party who conveyed body to Mineral King.

15th All day in camp. Wrote to Helen & notes

Saw mother ousel feeding one young able to fly well, nearly as large as its parent but light colored on throat & breast & tail shorter. The mother dived into roaring current & searched beneath logs rocks etc in all sorts of nooks angles on edge of torrent & beneath it going again and again to her big babe with her gains who received the morsels with quivering wings & m [most] delightful begging gestures & postures, while the