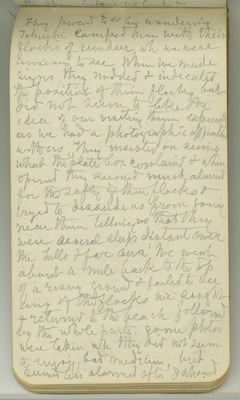 They proved to be wandering Tchuchi camped here with their flocks of reindeer, which we were anxious to see. When we made signs they nodded and indicated the position of their flocks, but did not seem to like the idea of our visiting them, especially as we had a photographic apparatus with us. They insisted on seeing what the plate box contained, and when opened they seemed much alarmed for the safety of their flocks and tried to dissuade us from going near them, telling us that they were several sleeps distant over the hills and far awa’. We went about a mile back to the top of a rising ground and failed to see any of the flocks we sought and returned to the beach, followed by the whole party. Some photos were taken, which they did not seem to enjoy; bad medicine, but seemed less alarmed after I showed