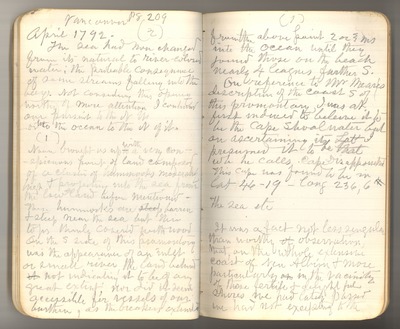 The sea had now changed from its natural to river-colored water, the probable consequence of some streams falling into the bay. Not considering this opening worthy of more attention, I continued our pursuit to the NW [north-west].

Noon brought us up [to] with a very conspicuous point of land composed of a cluster of hummocks moderately high & projecting into the sea from the low land before mentioned. These hummocks are [steep] barren & steep near the sea but thin tops thinly covered with wood on the S [south] side of this promontory was the appearance of an inlet or small river the land behind [it] not indicating it to be of any great extent, nor did it seem accessible [for] vessels of our burthen [burden], as the breakers extended

from the above point 2 or 3 ms [miles] into the ocean, until they joined those on the beach, nearly 4 leagues further S [south].

On reference to Mr. Mears' description of the coast S [south] of this promontory, I was at first induced to believe it to be the Cape Shoalwater but, on ascertaining its Lat’ [latitude] I presumed it to be that wh [which] he calls Cape Disappointment. This cape was found to be in lat [latitude] 46-19 long [longitude] 236, 6 [#]

It was a fact not less singular than worthy [of] observation, that on the whole extensive coast of New Albion & more particularly [on] in the vacinity [vicinity] of those fertile & delightful shores we had lately passed we had not excepting to the