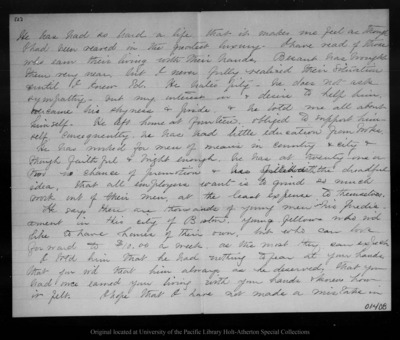 [2]He has had so hard a life that it makes me feel as though I had been reared in the greatest luxury. I have read of those who earn their living with their hands, Besant has brought them very near, but I never fully realized their situation until I new Ed. He hates pity, he does not ask sympathy, but my interest in & desire to help him overcame his shyness & pride & he told me all about himself. He left home at fourteen, obliged to support himself. Consequently, he has had little education from books. He has worked for men of means in country & city & though faithful & bright enough, he has at twenty-one or two no chance of promotion & has filled with the dreadful idea that all employers want is to grind so much work out of their men, at the least expense to themselves. He says there are thousands of young men in his predicament in this city of Boston, young fellows who w'd like to have homes of their own, but who can look forward to $10.00 a week, as the most they can expect. I told him that he had nothing to fear at your hands, that you w'd treat him always as he deserved, that you had once earned your living with your hands & knew how it felt. I hope that I have not made a mistake in 01408