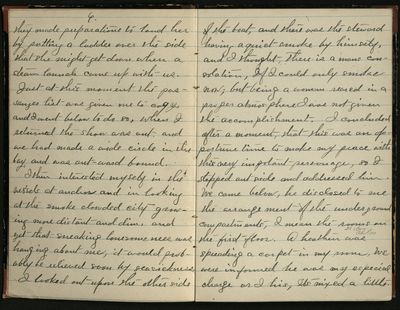 they made preparations to land her by putting a ladder over the side that she might get down when a steam launch came up with us. Just at this moment the passanger [passenger] list was given me to copy and I went below to do so, when I returned the show was out and we had made a wide circle in the bay and was out-ward bound.

I then interested myself in the vessels at anchor and in looking at the smoke clouded city growing more distant and dim, and yet that sneaking lonesomeness was hanging about me, it would probably be relieved soon by seasickness.

I looked out upon the other side

of the boat, and there was the steward having a quiet smoke by himself, and I thought, there is a mans consolation, if I could only smoke now; but being a woman reared in a proper atmosphere I was not given the accomplishment. I concluded after a moment that this was an opportune time to make my peace with this very important personage, so I stepped outside and addressed him. We came below, he disclosed to me the arrangement of the underground compartments, I mean the rooms on the first floor. A heathen (#1 boy Ah Loo) was spreading a carpet in my room, we were informed he was my special change or I his, its mixed a little.