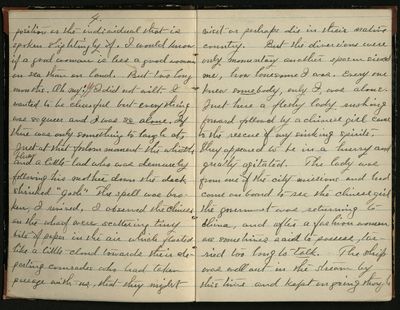 position on the individual that is spoken ship filmy by of. I would know if a good woman is less a good woman on sea then on land. But two long months Oh my! [//] I did not-will-I wanted to be cheerful but everything was so queer and I was so alone. If there was only something to laugh at, just at that forlorn moment the whistle [blew] and a little lad who was demurely following his mother down the deck shrieked “gosh” the spell was broken, I [revived], I observed the chimes as the wharf were scattering tiny bits of paper in the air which floated like little could towards their departing comrades who had taken passage with us, that they might

Visit or perhaps die in their native country. But the [diversions] were only momentarily another spasm seized me, how lonesome I was. Everyone knew somebody, only I was alone. Just here a fleshy lady rushing forward followed by a Chinese girl came to the rescue of ant sinking spirits. They appeared to be in a hurry and greatly agitated. The lady was from one of the city missions and had come on board to see the Chinese girl the government was returning to China, and after a fashion woman are sometimes said to posses, tarried too long to talk. The ship was well and out in the stream by this time and kept on going though