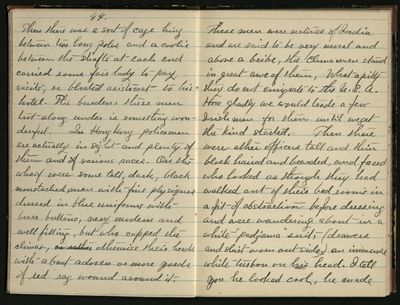 Then there was a sort of cage [hing] between [too] long poles and a coolie between the shafts at each end carried some fair lady to pay visits, or bloated aristocrat to his hotel. The burdens these men trot along under is something wonderful. In Hong Kong policemen are actually in sight and plenty of them and of various races. On the wharf were some tall, dark, black mustached men with fine physiques dressed in blue uniforms with brass buttons, very modern and well fitting, but who capped the climax, [or rather] otherwise their heads with about a dozen or more yards of red rag wound around it.

These men were natives of India and are said to be very moral and above a bribe, the Chinamen stand in great awe of them, what a pity they do not emigrate to the U.S.A. How gladly we would trade a few Irishmen for them until we get the kind started. Then there were other officers, tall and thin, black haired and bearded, and faces who looked as though they had walked out of their bedrooms in a fit of abstraction before dressing and were wandering about in a white “padjama” [pajama] suit, (drawers and shirt worn outside) an immense white turban on his head. I tell you he looked cool, he made