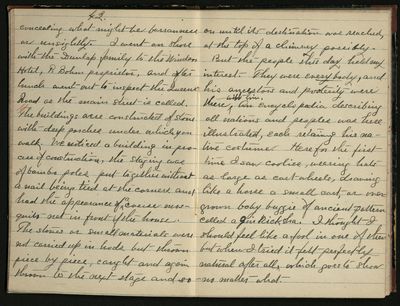 concealing what might be barronness [barrenness] and unsightly. I went on shore with the Dunlap family to the Windsor Hotel, P. Bohm proprietor, and after lunch went out to inspect the Queen’s Road as the main street is called.

The buildings were constructed of stone with deep porches under which you walk. We noticed a building in process of construction, the staging was of bamboo poles put together without a nail being tied at the corners and had the appearance of a coarse mosquito net in front of the house.

The stones or small materials were not carried up in hods but thrown piece by piece, caught and again thrown to the next stage and so

on until its destination was reached, at the top of a chimney possibly.

But the people this day held my interest. They were everybody, and his ancestors and posterity were there with him. An encyclopedia describing all nations and peoples was here illustrated, each retaining his native costume. Here for the first time I saw coolies, wearing hats as large as cart-wheels, drawing like a horse a small cart, an overgrown baby buggie of ancient pattern called a [Giu/Gin/Gau] Ricksha [Rickshaw]. I thought I should feel like a fool in one of them but when I tried it felt perfectly natural after all, which goes to show - no matter what.