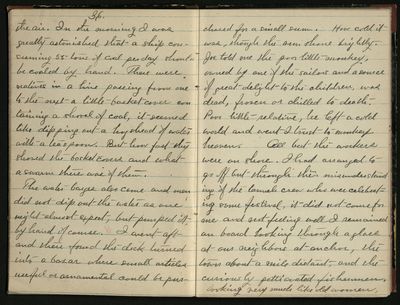 the air. In the morning I was greatly astonished that a ship consuming 55 tons of coal per day should be cooled by hand. There were natives in a line passing from one to the next a little basket cover containing a shovel of coal, it seemed like dipping out a hogshead of water with a teaspoon. But how fast they shoved the basket covers and what a swarm there was of them.

The water [barges] also came and men did not dip out the water as one might almost expect, but pumped it by hand of course. I went aft and there found the deck turned into a bazar [bazaar] where small articles useful as ornamental could be pur-

chased for a small sum. How cold it was, though the sun shone brightly. Joe told me the poor little monkey owned by one of the sailors and a source of great delight to the children, was dead, frozen or chilled to death. Poor little relative, he left a cold world and went I trust to monkey heaven. All but the workers were on shore. I had arranged to go off but through the misunderstanding of the [tannels] crew who were celebrating some festival, it did not come for me and not feeling well I remained on board looking through a glass at our neighbors at anchor, the town about a mile distant, and the curiously petticoated fishermen, looking very much like old women,