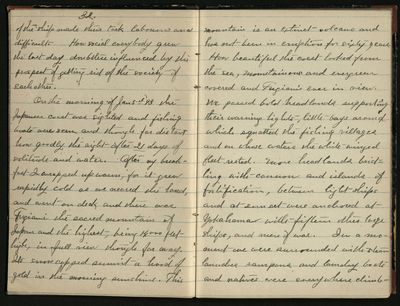 of the ship made their task laborious and difficult. How social everybody grew the last day doubtless influenced by the prospect of getting rid of the society of each other.

On the morning of Jan 5th ‘93, the Japanese coast was sighted and fishing boats were seen and though for distant how goodly the sight after 21 days of solitude and water. After my breakfast I wrapped up warm, for it grew rapidly cold as we neared the land, and went on deck and there was Fujinami the sacred mountain of Japan and the highest, being 14000 feet high, in full view though far away. Its snowcapped summit a hood of gold in the morning sunshine. This

mountain is an extinct volcano and has not been in eruption for sixty years. How beautiful the coast looked from the sea, mountainous and evergreen covered Fugiani [Fujinami] ever in view. We passed bold headlands supporting their warning lights, little bays around which squatted the fishing villages and on whose waters the white winged fleet rested. More headlands bristling with cannon and islands of fortification, between light ships and at sunset were anchored at Yokahama with fifteen other large ships, and men of war. In a moment we were surrounded with steam [launches] sampans and laundry boats and natives were everywhere climb-