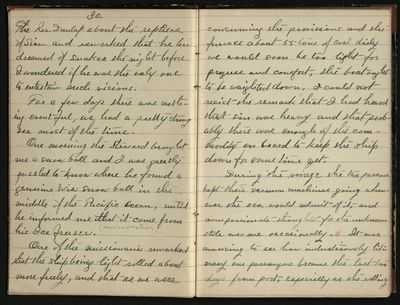 The Rev. [Reverend] Dunlap about the reptiles of Siam and remarked that he had dreamed of snakes the night before. I wondered if he was the only one to entertain such visions.

For a few days there was nothing eventful, we had a pretty strong sea most of the time.

One morning the steward brought me a snowball and was greatly puzzled where he found a genuine Wis [Wisconsin] snowball in the middle of the Pacific ocean, until he informed me that it came from his ice freezer. (new invention)

One of the missionaries remarked that the ship being light rolled about more freely, and that as were

consuming the provisions and the furnace about 55 tons of coal daily we would soon be too light for progress and comfort, the boat ought to be weighted down, I could not resist the remark “that I had heard that sin was heavy and that probably there was enough of the commodity on board to keep the ship down for sometime yet”

During the voiage [voyage] the two parsons kept their sermon machines going whenever the sea would admit of it, and compassionate thoughts for the unknown stole over me occasionally. It was amusing to see how industriously [literary] our passengers became the last two days from port, especially as the rolling