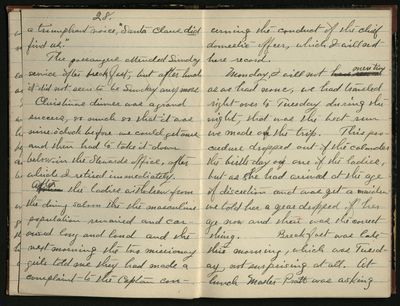 a triumphant voice, “Santa Claus did find us.”

The passengers attended Sunday service after breakfast, but after lunch it did not seem to be Sunday anymore. Christmas dinner was a grand success, so much so that it was nine o’clock before we could get [ours] and then had to take it down below in the Stewards office, after which I retired immediately.

-cerning the conduct of the chief domestic officer, which I will not here record.

Monday, I will not [here record] mention as we had none, we had traveled right over to Tuesday during the night, that was the best run we made of the trip. This procedure dropped out of the calendar the birthday of one of the ladies, but as she had arrived at the age of discretion and was yet a maiden we told her a year dropped off her age now and that was the correct thing. Breakfast was late this morning, which was Tuesday, not surprising at all. At lunch Master Pratt was asking