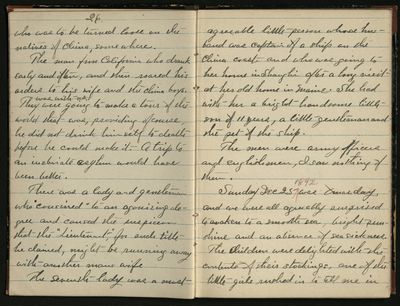 who was to be turned loose on the natives of China, somewhere.

The man from California who drank early and often, and then roared his orders to his wife and the China boys.

[was with us.] They were going to make a tour of the world that was, providing of course, he did not drink himself to death before he could make it. A trip to an inebriate asylum would have been better.

There was a lady and gentleman who “cousined” to an agonizing degree and caused the suspicion that the “lieutenant”, for such title he claimed, might be running away with another man’s wife

The seventh lady was a most

agreeable little-person whose husband was captain of a ship on the China coast and who was going to her home in Shanghai after a long visit at her old home in Maine. She had with her a bright handsome little son of 11 years, a little gentleman and the pet of the ship.

The men were army officers and Englishmen, I saw nothing of them.

Sunday Dec. 25 [1892] was Xmas day, and we were all agreeably surprised to awaken to a smooth sea, bright sunshine and an absence of seasickness. The children were delighted with the contents of their stockings, one of the little girls rushed in to tell me in