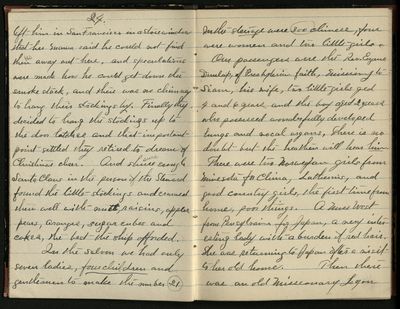 left him in San Francisco in a store window that her mama said he could not find them a way out here, and speculations were made how he could get down the smoke stack, and there was no chimney to hang their stockings by. Finally they decided to hang the stockings up to the door latches and that important point settled they retired to dream of Christmas cheer. And shure [sure] enough Santa Claus in the person of the Steward found the little stockings and crammed them well with nutt, raisins, apples, pears, oranges, sugar cubes and cakes, the best the ship afforded.

In the saloon we had only seven ladies, four children and gentlemen to make the [number] 21

In the storage were 300 chinese, four were women and two little-girls.

Our passengers were the Rev. [Reverend] Eugene Dunlap, of Presbyterian faith, missionary to Siam, his wife, two little-girls ged [aged] 4 and 6 years and the boy aged 2 years who possessed wonderfully developed lungs and vocal organs, there is no doubt but the [heathen] will hear him. There were two Norwegian girls from Minnesota for China, Lutherans, and good country girls, the first time from home, poor things. A [ ] West from Pennsylvania for Japan, a very interesting lady with a burden of red hair. She was returning to Japan after a visit to her old home. Then there was an old missionary Lyon