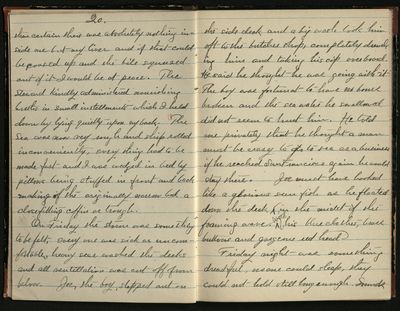 [their] certain there was absolutely nothing inside me but my liver and if that could be [coaxed] up and the bile squeezed out of it I would be at peace. The steward kindly administered nourishing broths in small installments which I held down by lying quietly upon my back. The sea was now very rough and ship rolled inconveniently, every thing had to be made fast and I was wedged in bed by pillows being stuffed in front and back making of the originally narrow bed a close fitting coffin or trough.

On Friday the storm was something to be felt, every one was sick or uncomfortable, heavy seas washed the decks and all the ventilation was cut off from below. Joe, the boy, stepped out on

the side deck and a big wash took him off to the butcher shop, completely drenching him and taking his cap overboard. He said he thought he was going with it. The boy was fortunate to have no bones broken and the sea water he swallowed did not seem to hurt him. He told me privately that he thought a man must be crazy to go to sea as a business. If he reached San Francisco again he would stay there. Joe must have looked like a glorious sun fish as he floated down the deck in the midst of the foaming wave. [With] his blue clothes, brass buttons and gorgeous red head.

Friday night was something dreadful, no one could sleep, they could not hold still long enough. Sounds