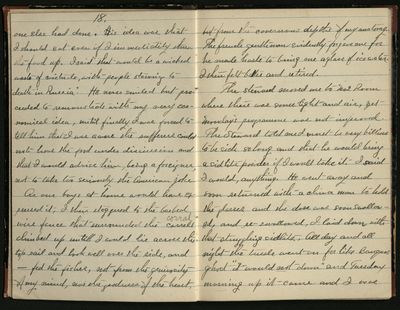 one else had done. His idea was that I should eat even if I immediatily [immediately] [threw] the food up. I said “that would be a wicked waste of victuals, with people starving to death in Russia.” He never smiled but proceeded to remonstrate with my very economical idea, until finally I was forced to tell him that I was aware the sufferers could not have the food under discussion and that I would advise him, being a foreigner, not to take too seriously the American joke.

As our boys at home would have expressed it, I then staggered to the barbed wire fence that surrounded the [correll] corral climbed up untill [until] I could lie across the top rail and look well over the side, and -- fed the fishes, not from the genirosity [generosity] of my mind, nor the goodness of the heart,

but from the covernous [cavernous] depths of my anatomy. The French gentleman evidently forgave me for he made haste to bring me a glass of ice water. I then felt better and retired. The steward moved me to no. 2 Room where there was some light and air, yet Monday’s programme [program] was not improved. The steward told me I must be very billious [bilious] to be sick so long and that he would bring a sidlits [Seidlitz] powder if I would take it. I said I would, anything. He went away and soon returned with a china man to hold the glasses and the dose was soon swallowed and re-swallowed. I laid down with that struggling siedlits [Seidlitz]. All day and all night the tussle went on for like Banquos ghost “I would not down” and Tuesday morning up it came and I was