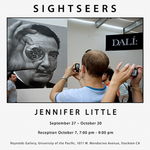 University of the Pacific

"In societies where modern conditions of production prevail, all life presents itself as an immense accumulation of spectacles. Everything that was directly lived has moved away into a representation." - Guy Debord, Society of the Spectacle

Weaving together themes of alienation, technology, advertising and media imagery, Little's work shows these influences not only on what people choose to photograph, but how they photograph.

By chronicling familiar tourist places, such as the observation deck, nature preserves, urban areas and botanical garden, Little's photos reflect how landscape is marketed as a spectacle for tourists to photograph. The view itself has been turned into a commodity.

Jennifer Little is Assistant Professor in the Department of Visual Art, College of the Pacific, where she teaches photography. She has exhibited her work across the United States, including The San Francisco Arts Commission Gallery, The Center for Fine Art Photography in Fort Collins, CO, Jay Etkin Gallery in Memphis, TN and Stanford University's Thomas Welton Stanford Art Gallery.