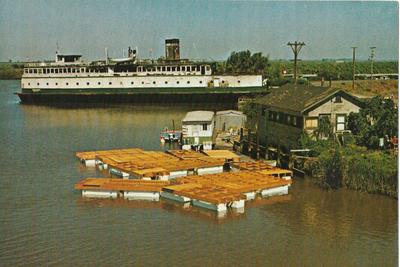 The 212 x 50 foot hull is that of the Chippewa, originally built as a small freighter around 1900, in Toledo, Ohio, for Puget Sound interests, and was later converted to a passenger-car ferryboat. The Chippewa arrived in San Francisco Bay in 1968 where it caught fire. Its plans as a private maritime museum failed, due to insufficient insurance, so it was sold and remains north of Stockton, in San Joaquin County, at Paradise Point, California. The docks in the foreground were fabricated during the summer of 1969, by a new houseboat operation, Magic Holiday Floatels, Inc. The ferryman of Disapointment Slough, lives in the grey weather-beaten house which has been used as a Hollywood set.