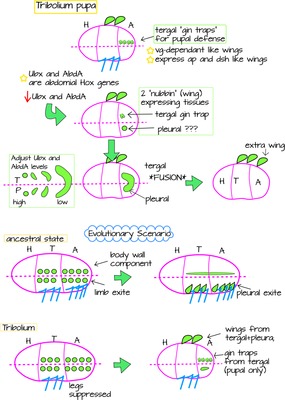 When levels of abdominal Hox genes Ubx and AbdA, are experiementally lowered, instead of gin traps, the two Nubbin-expressing tissues fuse. This fused tissue later forms a wing-like outgrowth in an abdominal segment. This suggest an evolutionary scenario wherein the pancrustacean ancestor had two Vestigal/Nubbin expressing tissues in its abdominal and thoracic segments. The tergal tissue would become part of the body wall and the pleural tissue would join the ventral legs to become the gill-branch. When insects moved to land, however, the gill-forming tissue was up for grabs since gills were no longer selected for. In the abdomen, the gill-forming tissue becomes part of the body wall, but in the thorax, it fuses with the Vestigial/Nubbin expressing tergal tissue to form wings. In the abdomen, where wing formation is suppressed, the tergal Vestigial/Nubbin tissue is free to take on a new fate. In the case of Tribolium, it forms a defensive structure in the abdomen, the pupal gin-traps. In the thorax it forms the carinated margin. In this way, the wings are a novelty, but can also be thought of as serial homologs to the pleural plates+carinated margin in the thorax as well as to the gin-trap+pleural tissue in the abdomen.