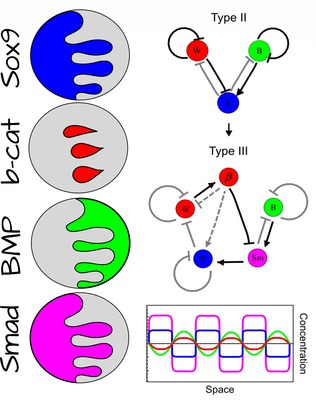 Sox9, the primary digit marker, specifies cells to form skeletal condensations. It is expressed in the cells that will become digits in the autopod. In this model, Sox9 (blue) is the activator and it interacts with the BMP and Wnt signaling pathways. Autopods are shown as grey circles in the left column with color-coded expression patterns. Sox9 and Smad (purple, output of the BMP pathway) are expressed in the digits while BMP (green) and b-catenin (red, output of the Wnt pathway) are expressed in the interdigits.

The left column shows the Turing model for these interactions. The top model was originally proposed by Raspopovic et al and subsequently refined by Marcon et al21. The Marcon et al model maintains the centrality of Sox9, which represses its own expression outside the condensation. Sox 9 inhibits the Wnt pathway, which represses b-catenin and other target genes in the Sox9 zones. b-catenin represses Smad, which is a target of diffusible BMP signaling. The inhibitory action of Smad on BMP ensures that BMP is not active in the Smad-expressing cells, giving these two members of the BMP pathway complementary activation patterns.

Modified from Marcon et al originally published under a CC BY 4.0 license