Home > College of the Pacific > Kam Minority Archive > All Photographs > 2598 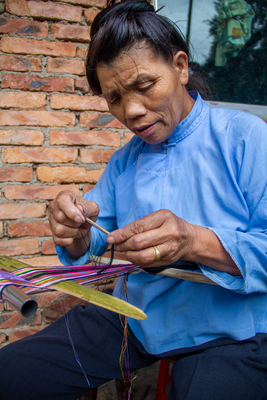 Photo from Dimen Village of Wu Mnci making the tabby heddle for a backstrap loom using a small heddle stick. Using a black thread, she makes a loop around each thread of the bottom warp layer that she pulled up and separated with the weaver's sword. She fixes each loop to the heddle stick. Here she has already made several loops and is wrapping the thread around the heddle stick. The backstrap loom is attached to her waist by the cloth beam pulled through a thick cloth belt.

Funding Provided by University of the Pacific

All images and videos provided in the Kam Minority Archive by Marie Anna Lee on University of the Pacific's Scholarly Commons are licensed under a Creative Commons Attribution-NonCommercial-NoDerivs (CC BY-NC-ND) license.

This work is licensed under a Creative Commons Attribution-Noncommercial-No Derivative Works 3.0 License.