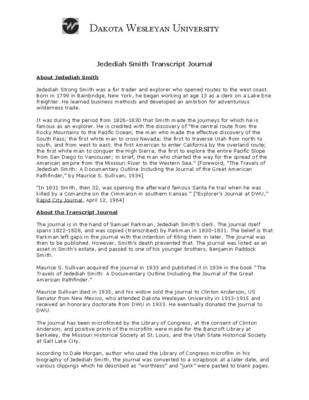 DAKOTA WESLEYAN UNIVERSITY Jedediah Smith Transcript Journal About Jedediah Smith Jedediah Strong Smith was a fur trader and explorer who opened routes to the west coast. Born in 1799 in Bainbridge, New York, he began working at age 13 as a clerk on a Lake Erie freighter. He learned business methods and developed an ambition for adventurous wilderness trade. It was during the period from 1826-1830 that Smith made the journeys for which he is famous as an explorer. He is credited with the discovery of “the central route from the Rocky Mountains to the Pacific Ocean; the man who made the effective discovery of the South Pass; the first white man to cross Nevada; the first to traverse Utah from north to south, and from west to east; the first American to enter California by the overland route; the first white man to conquer the High Sierra; the first to explore the entire Pacific Slope from San Diego to Vancouver; in brief, the man who charted the way for the spread of the American empire from the Missouri River to the Western Sea.” [Foreword, “The Travels of Jedediah Smith: A Documentary Outline Including the Journal of the Great American Pathfinder,” by Maurice S. Sullivan, 1934] “In 1831 Smith, then 32, was opening the afterward famous Santa Fe trail when he was killed by a Comanche on the Cimmaron in southern Kansas.” [“Explorer’s Journal at DWU,” Rapid City Journal, April 12, 1964] About the Transcript Journal The journal is in the hand of Samuel Parkman, Jedediah Smith’s clerk. The journal itself spans 1822-1828, and was copied (transcribed) by Parkman in 1830-1831. The belief is that Parkman left gaps in the journal with the intention of filling them in later. The journal was then to be published. However, Smith’s death prevented that. The journal was listed as an asset in Smith’s estate, and passed to one of his younger brothers, Benjamin Paddock Smith. Maurice S. Sullivan acquired the journal in 1933 and published it in 1934 in the book “The Travels of Jedediah Smith: A Documentary Outline Including the Journal of the Great American Pathfinder.” Maurice Sullivan died in 1935, and his widow sold the journal to Clinton Anderson, US Senator from New Mexico, who attended Dakota Wesleyan University in 1913-1915 and received an honorary doctorate from DWU in 1933. He eventually donated the journal to DWU. The journal has been microfilmed by the Library of Congress, at the consent of Clinton Anderson, and positive prints of the microfilm were made for the Bancroft Library at Berkeley, the Missouri Historical Society at St. Louis, and the Utah State Historical Society at Salt Lake City. According to Dale Morgan, author who used the Library of Congress microfilm in his biography of Jedediah Smith, the journal was converted to a scrapbook at a later date, and various clippings which he described as “worthless” and “junk” were pasted to blank pages.