Home > All Reminiscences of John Muir > 95 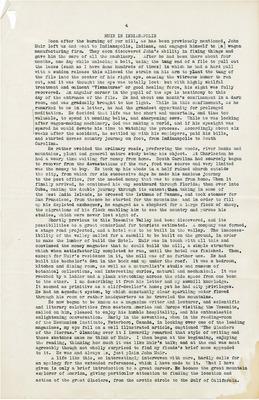 4 MUIR IN INDIiiNAPOLIS Soon after the burning of our mill, as has been previously mentioned, John Muir left us and went to Indianapolis, Indiana, and engaged himself to [a] wagon manufacturing firm. They soon discovered John's ability in fixing things and gave him the care of all the machinery. After he had been there about four months, one day while unlacing a belt, using the tang end of a file to pull out the laces (such as I have done hundreds of times) in which he had a hard pull with a sudden release this allowed the strain on his arm to plant the tang of the file into the center of his right eye, causing the vitreous humor to run out, and it was thought the eye was totally lost- but -with highly skilful treatment and eminent "Visnaturae" or good healing force, his sight was fully recovered. An angular corner in the pupil of the eye is testimony to this day of the entrance of the file. He had about one month's confinement in a dark room, and was gradually brought to the light. While in this confinement, as he , remarked to me in a letter, he had the grandest opportunity for prolonged meditation. He decided that life was too short and uncertain, and time too valuable, to spend it mending belts, and sharpening saws. While he was looking after wagon-making machinery, God was making a world, and if his eyesight was spared he would devote his time to watching the process. Accordingly about six :weeks after the accident, he settled up with his employers, paid his bills, and started across country journey on foot, from Indianapolis to South Carolina. He rather avoided the ordinary roads, preferring the woods, river banks and mountains, plant and general nature study being his object. At Charleston he had a weary time waiting for money from home. South Carolina had scarcely began to recover from the devastations of the war, food was scarce and very limited was the money to buy. He took up his abode In a half ruined church outside the city, from which for six successive days he made his anxious journey- to the post office, for the needed money that was to come from home. When it finally arrived, he continued his way southward through Florida; then over into Cuba, making the double journey through its extent;then taking in some of the West India Islands, he crossed the Isthmus of Panama, and took steamer for San Francisco, from thence he started for the mountains: and in order to fill up his depleted exchequer,, he engaged as a shepherd for a large flock of sheep, the migrations of his flock enabling him to see the country and pursue his studies, which were never lost sight of. Shortly previous to this Yosemite Yalley had been discovered, and its possibilities as a great wonderland for tourists estimated. A company was.formed, a stage road projected, and a hotel was to be built in the valley. The inaccessibility of the valley called for a sawmill to be built on the ground, in order to make the lumber of build the Hotel. Muir was in touch -with all this and convinced the money magnates that he could build the mill, a simple structure which when satisfactorily completed he ran, until the hotel was finished. Then, except for Muir's residence in it, the mill was of no further use. He had built his bachelor's den in the back end up under the roof. It was a bedroom, kitchen and dining room, as well as a naturalist's studio and museum of botanicaj. collections, and interesting curios, natural and mechanical. It was reached by a ladder and a plank stretching across the wide space from one beam to the other. I am describing it from his letter and my sawmill knowledge. It seemed as primitive as a cliff-dweller's home; yet he had city privileges. He had an aqueduct system, by which constantly clear sparkling water flowed through his room or rather headquarters as he traveled the mountains. He now began to be known as a magazine writer and lecturer, and scientific and literary celebrities from eastern America and Europe visiting the Yosemite, called on him, pleased to enjoy his humble hospitality, and his enthusiastic enlightening conversation. Early in the seventies, when in the reading-room of the Mechanics Institute, Peterboro, Canada, in looking over one of the leading magazines, my eye fell on a well illustrated article, captioned "The Glaciers of the Sierras." Glancing over it I inwardly remarked that style of writing and those sketches make me think of Muir. I then began at the beginning, enjoying the reading, thinking how much it was like Muir's talk; and at the end was most agreeably though not wholly surprised to find my fiendsfs brief name appended to it. He was and always is, just plain John Muir. A life like this, so interestingly interwoven with ours, hardly calls for an apology for the extended references, which I have made to it. What I have given is only a brief introduction to a great career. He became the great mountain explorer of America, giving particular attention to finding the location and action of the great Glaciers, from the arctic circle to the Gulf of California.