Home > All Reminiscences of John Muir > 93 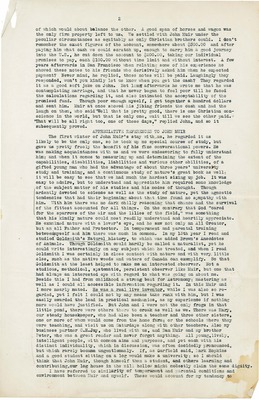 of which would about balance the other. A good span of horses and wagon was the only firm property left to us,, We settled with John Muir under the peculiar circumstances as equitably as only Christian brothers could. I don't remember the exact figures of the account, somewhere about $300.00 and after paying him what cash we could scratch up, enough to carry him a good journey into the U.S., he cut down the account to §200,00, taking our individual promises to pay, each $100.00 without time limit and without interest. A few years afterwards in San Francisco when relating some of his experience he showed these notes to his friends who derisively asked him when he expected payment? lever mind, he replied, those notes will be paid. Laughingly they responded, won't you kindly let us know when you get the cash? They regarded it as a good soft joke on John. Not long afterwards he wrote me that he was contemplating marriage, and that he never began to feel poor till he faced the calculations regarding it, and also intimated the acceptability of the promised fund. Though poor enough myself, I got together a hundred dollars and sent him. Muir at once showed his jibing friends the cash and had the laugh on them, who said"Sell that is pretty good, there is one Christian conscience in the world, but that is only one, wait till we see the other paid." 'That will be all right too, one of these days," replied John, and so it subsequently proved. APPRECIATIVE REFERENCES TO JOHN MUIR The first winter of John Hair's stay withjas, he regarded it as likely to be the only one, so he took up no special course of study, but gave us pretty freely the ."benefit of his fine conversational powers. He was making acquaintances with us and we were endeavoring to fully understand him: and when it comes to measuring up and determining the extent of the capabilities, disabilities, liabilities and various other abilities, of a gifted young man who had the advantage of about three years' university study and training, and a continuous study of nature's great book as well; it will be easy to see that'we had much the hardest sizing up job. It was easy to admire, but to understand and appreciate him required some knowledge of the subject matter of his studies and his modes of thought. Though I ardently devoted to science as well as the study of nature, yet the agnostic itendencies that had their beginning about that time found no sympathy with • him. With him there was no dark chilly reasoning that chance and the survival ; of the fittest accounted for all things. On the contrary that God "cared |for the sparrows of the air and the lilies of the field*" was something that his kindly nature could most readily understand and heartily appreciate. He examined nature with a lover's eye, and he saw not only an All Creator, but an all Father and Protector. In temperament and parental training betweenmyself and him there was much in common. In my 15th year I read and studied Goldsmith's Natural history, to which was added Brown's Anecdotes of Animals. Though "Goldsmith could hardly be called a naturalist, yet he could v;rite interestingly on any subject which he treated, and when I read Goldsmith I was certainly in close contact with nature and with very, little else, such as the native weeds and waters of Canada can exemplify. So that Goldsmith at the least helped to make me an interested observer. Not a studious, methodical, systematic, persistent observer like Muir, but one that had always an interested eye with regard to what was going on about me. Beside this I had from childhood a strong bent for Astronomy: mastering as well as I could all accessible information regarding it. In this Muir and I more nearly mated. He was a real live inventor, while 1 was also so regarded, yet I felt I could not by any means take rank with him, but I was easily awarded the lead in practical mechanics, as my experience if nothing more would have justified. But John and I were not the only frogs in that little pond, there were others there to croak as well as we. There was Mary, our steady housekeeper, -who had also been a teacher and three other sisters, one or more of whom would come from the home farm; or the schools where they were teaching, and visit us on Saturdays along with other teachers. Also my business partner G.H.Jay, who lived with us, and Dan Muir and my brother Peter, who was a great reader and never forgot anything. All young,lively, intelligent people, with common aims and purposes, and yet each with his distinct individuality, which in discussion, was often decidedly pronounced, but which rarely became ungentlemanly. If, as Garfield said, "ark Hopkins and a good student sitting on a log would make a university: so I should think that John Muir, though himself then a student, and others learning and contributing,our log house in the mill hollow might modestly claim the same dignity. I have referred to similarity of temperament and parental conditions and environment between Muir and myself. These would account for my tendency to