Home > All Reminiscences of John Muir > 92 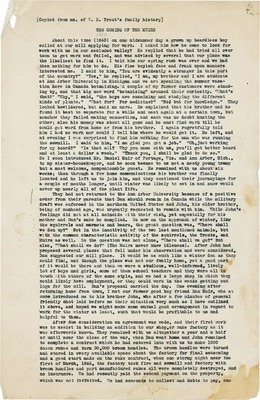 [Copied from ms. of W. H. Trout's family history] THE COMIHG OP THE MUIBS About this time (1863) on one midsummer day a grown up "beardless boy called at our mill applying for work. I asked him how he came to look for work with us in our secluded valley? He replied that he had tried all over town to get work and failed, and was advised by several that our place was the likeliest to find it. I told him our spring rush was over and we had then nothing for him to do. His fine boyish face and frank open manners interested me. I said to him, "You are evidently a stranger in this part of the country?" "Yes," he replied, "I am, my brother and I are students at Ann Arbor University in Michigan and we are spending the sunnier vacation here in Canada botanizing.'■'A couple of my farmer customers were standing by, and that big new word "botanizing" aroused their curiosity. "What's that?" "Why," I said, "the boys are examining and studying the different kinds of plants." "What for? For medicine?" "NoJ but for knowledge." They looked bewildered, but said no more. He explained that his brother and he found it best to separate for a while and meet again at a certain town, but somehow they failed making connection, and each was no doubt hunting the other; also his money was about all gone and he must find work till he could get word from home or from his brother. I again regretfully told him I had no work nor could I tell him where he would get it. He left, and at evening I was surprised to find him working for the man who was running the sawmill. I said to him, "I am glad you got a job." "Oh, just working for my board?" "Is that all? "Why you come with us, you'll get better board and at least a dollar a week." "Thank you, I shall be glad to do so." So I soon introduced Mr. Daniel Muir of Portage, Wis. and Ann Arbor, Mich., to my sister-housekeeper, and he soon became to us not a needy young tramp but a most welcome, companionable guest. He remained with us about six weeks* then through a few home communications his brother was finally located and he left us to join him, and they continued their jouraeyings for a eouple of months longer, until winter was likely to set in and snow would cover up nearly all of the plant life. They had not returned to the Ann Arbor University because of a positive order from their parents that Dan should remain in Canada while the military draft was enforced in the northern United States and John, his elder brother, being of manhood age, was urgently requested to remain with him. While John's feelings did not at all coincide with their wish, yet especially for his mother and Dan's sake he complied. So now on the approach of winter, like the squirrels and marmots and bears, the great question was, "fthere shall we den up?" Not in the inactivity of the two last mentioned animals, but with the common characteristic activity of the squirrels, the Trouts, and Muirs as well. So the question was not alone, "Where shall we go?" But also, "What shall we do?" (The Muirs never knew idleness). After John had proposed several places that fell under his observation and were considered, Dan suggested our mill place. It would be as much like a winter den as they could find, and though the place was not our family home, yet a good part of it would be there and then we were a studious, well-informed, lively lot of boys and girls, some of them school teachers and they were all in touch .ith others of the same style, and we had a large shop in which they could likely have employment, or they could work in the woods getting out logs for the mill. Dan's proposal carried the day. One evening after returning home from town, I met our fonner good boy friend Dan Muir, who at once introduced me to his brother John, who after a few minutes of general friendly chat laid before me their situation very much as I have outlined it above, and hoped we might make some mutual good arrangement in regard to work for the winter at least, such that would be profitable to us and helpful to them. After due consideration an agreement was made, and their first work was to assist in building an addition to our shop,or rake factory as it was afterwards known. They remained with us altogether a year and a half or until near the close of the war, when Dan went home and John remained to complete a contract which he had entered into with us to make 1000 dozen rakes and turn 30,000 broom handles. The broom handles were turned and stored in every available space about the factory for final seasoning and a good start made on the rake contract, when one stormy night near the first of March, 1866, the factory took fire and sawmill and factory with broom handles and part manufactured rakes all were completely destroyed, and no insurance. We had recently paid the second payment on the property, which was not forfeited. We had accounts to collect and debts to pay, one