Home > All Reminiscences of John Muir > 57 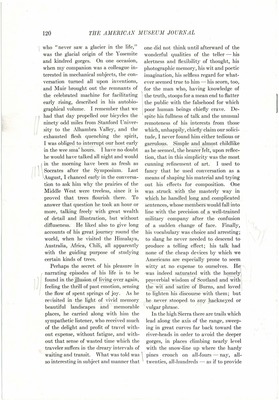 120 THE AMERICAN MUSEUM JOURNAL who "never saw a glacier in the life," was the glacial origin of the Yosemite and kindred gorges. On one occasion, when my companion was a colleague interested in mechanical subjects, the conversation turned all upon inventions, and Muir brought out the remnants of the celebrated machine for facilitating early rising, described in his autobiographical volume. I remember that we I had that day propelled our bicycles the ninety odd miles from Stanford University to the Alhambra Valley, and the exhausted flesh quenching the spirit, I was obliged to interrupt our host early in the wee sma' hours. I have no doubt he would have talked all night and would i in the morning have been as fresh as , Socrates after the Symposium. Last 'August, I chanced early in the conversation to ask him why the prairies of the Middle West were treeless, since it is proved that trees flourish there. To answer that question he took an hour or more, talking freely with great wealth of detail and illustration, but without diffuseness. He liked also to give long accounts of his great journey round the world, when he visited the Himalaya, Australia, Africa, Chili, all apparently with the guiding purpose of studying certain kinds of trees. Perhaps the secret of his pleasure in narrating episodes of his life is to be found in the illusion of living over again, I feeling the thrill of past emotion, sensing the flow of spent springs of joy. As he revisited in the light of vivid memory beautiful landscapes and memorable places, he carried along with him the sympathetic listener, who received much of the delight and profit of travel without expense, without fatigue, and without that sense of wasted time which the traveler suffers in the dreary intervals of waiting and transit. What was told was so interesting in subject and manner that one did not think until afterward of the wonderful qualities of the teller — his alertness and flexibility of thought, his photographic memory, his wit and poetic imagination, his selfless regard for whatever seemed true to him —his scorn, too, for the man who, having knowledge of the truth, stoops for a mean end to flatter the public with the falsehood for which poor human beings chiefly crave. Despite his fullness of talk and the unusual remoteness of his interests from those which, unhappily, chiefly claim our solicitude, I never found him either tedious or garrulous. Simple and almost childlike as he seemed, the hearer felt, upon reflection, that in this simplicity was the most cunning refinement of art. I used to fancy that he used conversation as a means of shaping his material and trying out his effects for composition. One was struck with the masterly way in which he handled long and complicated sentences, whose members would fall into line with the precision of a well-trained military company after the confusion of a sudden change of face. Finally, his vocabulary was choice and arresting; to slang he never needed to descend to produce a telling effect; his talk had none of the cheap devices by which we Americans are especially prone to seem witty at no expense to ourselves. He •was indeed saturated with the homely proverbial wisdom of Scotland and with the wit and satire of Burns, and loved to lighten his discourse with them; but he never stooped to any hackneyed or vulgar phrase. In the high Sierra there are trails which lead along the axis of the range, sweeping in great curves far back toward the river-heads in order to avoid the deeper gorges, in places climbing nearly level with the snow-line up where the hardy pines crouch on all-fours — nay, all- twenties, all-hundreds — as if to provide