Home > All Reminiscences of John Muir > 56 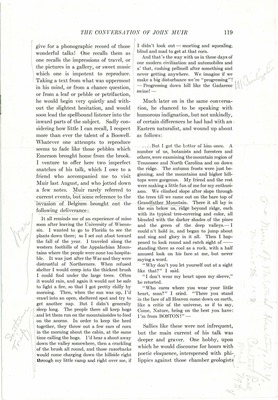 THE CONVERSATION OF JOHN MUIR 119 give for a phonographic record of those wonderful talks! One recalls them as one recalls the impressions of travel, or the pictures in a gallery, or sweet music which one is impotent to reproduce. Taking a text from what was uppermost in his mind, or from a chance question, or from a leaf or pebble or petrifaction, he would begin very quietly and without the slightest hesitation, and would soon lead the spellbound listener into the inward parts of the subject. Sadly considering how little I can recall, I respect more than ever the talent of a Bos well. Whatever one attempts to reproduce seems to fade like those pebbles which Emerson brought home from the brook. I venture to offer here two imperfect snatches of his talk, which I owe to a friend who accompanied me to visit Muir last August, and who jotted down a few notes. Muir rarely referred to current events, but some reference to the invasion of Belgium brought out the following deliverance: It all reminds me of an experience of mine soon after leaving the University of Wisconsin. I wanted to go to Florida to see the plants down there; so I set, out afoot toward the fall of the year. I traveled along the western foothills of the Appalachian Mountains where the people were none too hospitable. It was just after the War and the}' were distrustful of Northerners. When refused shelter I would creep into the thickest brush I could find under the large trees. Often it would rain, and again it would not be safe to light a fire, so that I got pretty chilly by morning. Then, when the sun was up, I'd crawl into an open, sheltered spot and try to get another nap. But I didn't generally ' sleep long. The people there all keep hogs and let them run on the mountainsides to feed on the acorns. In order to keep the herd together, they throw out a few ears of corn in the morning about the cabin, at the same time calling the hogs. I 'd hear a shout away down the valley somewhere, then a crackling of the brush all round, and those razorbacks would come charging down the hillside right through nry little camp and right over me, if I didn't look out — snorting and squealing, blind and mad to get at that corn. And that's the way with us in these days of our modern civilization and automobiles and a' that, rushing pellmell after something and never getting anywhere. We imagine if we make a big disturbance we're "progressing"! — Progressing down hill like the Gadarenc swine! — Much later on in the same conversation, he chanced to be speaking with humorous indignation, but not unkindly, of certain differences he had had with an Eastern naturalist, and wound up about as follows: . . . But I got the better of him once. A number of us, botanists and foresters and others, were examining the mountain region of Tennessee and North Carolina and on down the ridge. The autumn frosts wore just beginning, and the mountains and higher hilltops were gorgeous. My friend and the rest were making a little fun of me for my enthusiasm. We climbed slope after slope through the trees till we came out on the bare top of Grandfather Mountain. There it all lay in the sun below us, ridge beyond ridge, each with its typical tree-covei'ing and color, all blended with the darker shades of the pines and the green of the deep valleys.— I could n't hold in, and began to jump about and sing and glory in it all. Then I happened to look round and catch sight of standing there as cool as a rock, with a half amused look on his face at me, but never saying a word. "Why don't you let yourself out at a sight like that?" I said. "I don't wear my heart upon my sleeve," he retorted. "Who cares where you wear your little heart, man?" I cried. "There you stand in the face of all Heaven come down on earth, like a critic of the universe, as if to say, Come, Nature, bring on the best you have: I'm from BOSTON!" — Sallies like these were not infrequent, but the main current of his talk was deeper and graver. One hobby, upon which he would discourse for hours with poetic eloquence, interspersed with philippics against those chamber geologists