Home > All Reminiscences of John Muir > 55 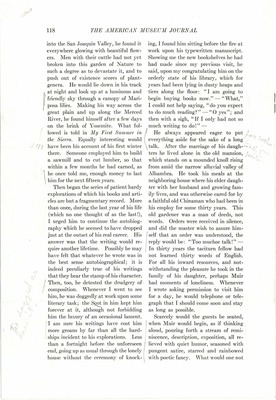 118 THE AMERICAN MUSEUM JOURNAL ■' rH KJ into the San Joaquin Valley, he found it everywhere glowing with beautiful flowers. Men with their cattle had not yet broken into this garden of Nature to such a degree as to devastate it, and to push out of existence scores of plant- genera. He would lie down in his track at night and look up at a luminous and friendly sky through a canopy of Mariposa lilies. Making his way across the great plain and up along the Merced River, he found himself after a few days on the brink of Yosemite. What followed is told in My First Summer in the Sierra. Equally interesting would have been his account of his first winter there. Someone employed him to build a sawmill and to cut lumber, so that within a few months he had earned, as he once told me, enough money to last him for the next fifteen years. Then began the series of patient hardy explorations of which his books and articles are but a fragmentary record. More than once, during the last year of his life (which no one thought of as the last!), I urged him to continue the autobiography which he seemed to have dropped just at the outset of his real career. His answer was that the writing would require another lifetime. Possibly he may have felt that whatever he wrote was in the best sense autobiographical; it is indeed peculiarlj' true of his writings that they bear the stamp of his character. Then, too, he detested the drudgery of composition. Whenever I went to see him, he was doggedly at work upon some literary task; the Scot in him kept him forever at it, although not forbidding him the luxury of an occasional lament. I am sure his writings have cost him more groans by far than all the hardships incident to his explorations. Less than a fortnight before the unforeseen end, going up as usual through the lonely house without the ceremony of knock ing, I found him sitting before the fire at work upon his typewritten manuscript. Showing me the new bookshelves he had had made since my previous visit, he said, upon my congratulating him on the orderly state of his library, which for years had been lying in dusty heaps and tiers along the floor: "I am going to begin buying books now." — "What," I could not help saying, "do you expect to do much reading?" — "O yes"; and then with a sigh, " If I only had not so much writing to do!" — He always appeared eager to put ,' everything aside for the sake of a long ytalk. After the marriage of his daugh- ^ <- , • ters he lived alone in the old mansion, ' which stands on a mounded knoll rising from amid the narrow alluvial valley of Alhambra. He took his meals at the neighboring house where his elder daughter with her husband and growing family lives, and was otherwise cared for by a faithful old Chinaman who had been in his employ for some thirty years. This old gardener was a man of deeds, not words. Orders were received in silence, and did the master wish to assure himself that an order was understood, the reply would be: "Too muchee talk!" — J In thirty years the taciturn fellow had not learned thirty words of English. For all his inward resources, and notwithstanding the pleasure he took in the family of his daughter, perhaps Muir had moments of loneliness. Whenever I wrote asking permission to visit him for a day, he would telephone or telegraph that I should come soon and stay as long as possible. Scarcely would the guests be seated, when Muir would begin, as if thinking aloud, pouring forth a stream of reminiscence, description, exposition, all re- ■ lieved with quiet humor, seasoned with pungent satire, starred and rainbowed with poetic fancy. What would one not