Home > All Reminiscences of John Muir > 54 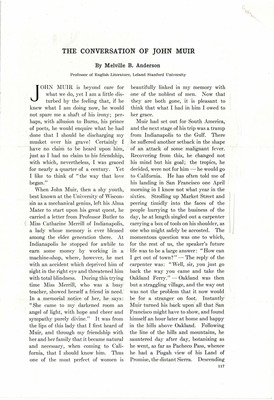 THE CONVERSATION OF JOHN MUIR By Melville B. Anderson Professor of English Literature, Leland Stanford University JOHN MUIR is beyond care for what we do, yet I am a little disturbed by the feeling that, if he knew what I am doing now, he would not spare me a shaft of his irony; perhaps, with allusion to Burns, his prince of poets, he would enquire what he had done that I should be discharging my musket over his grave! Certainly I have no claim to be heard upon him, just as I had no claim to his friendship, with which, nevertheless, I was graced for nearly a quarter of a century. Yet I like to think of "the way that love began." When John Muir, then a shy youth, best known at the University of Wisconsin as a mechanical genius, left his Alma Mater to start upon his great quest, he carried a letter from Professor Butler to Miss Catharine Merrill of Indianapolis, a lady whose memory is ever blessed among the elder generation there. At Indianapolis he stopped for awhile to earn some money by working in a machine-shop, where, however, he met with an accident which deprived him of sight in the right eye and threatened him with total blindness. During this trying- time Miss Merrill, who was a busy teacher, showed herself a friend in need. In a memorial notice of her, he says: "She came to my darkened room an angel of light, with hope and cheer and sympathy purely divine." It was from the lips of this lady that I first heard of Muir, and through my friendship with her and her family that it became natural and necessary, when coming to California, that I should know him. Thus one of the most perfect of women is beautifully linked in my memory with one of the noblest of men. Now that they are both gone, it is pleasant to think that what I had in him I owed to her grace. Muir had set out for South America, and the next stage of his trip was a tramp from Indianapolis to the Gulf. There he suffered another setback in the shape of an attack of some malignant fever. Recovering from this, he changed not his mind but his goal; the tropics, he decided, were not for him — he would go to California. He has often told me of his landing in San Francisco one April morning in I know not what year in the sixties. Strolling up Market Street and peering timidly into the faces of the people hurrying to the business of the clay, he at length singled out a carpenter carrying a box of tools on his shoulder, as one who might safely be accosted. The momentous question was one to which, for the rest of us, the speaker's future life was to be a large answer: "How can I get out of town?" — The reply of the carpenter was: "Well, sir, you just go back the way you came and take the Oakland Ferry." — Oakland was then but a straggling village, and the way out was not the problem that it now would be for a stranger on foot. Instantly Muir turned his back upon all that San Francisco might have to show, and found himself an hour later at home and happy in the hills above Oakland. Following the line of the hills and mountains, he sauntered day after day, botanizing as he went, as far as Pacheco Pass, whence he had a Pisgah view of his Land of Promise, the distant Sierra. Descending 117