Home > All Reminiscences of John Muir > 39 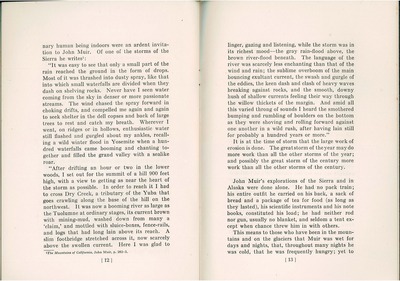 nary human being indoors were an ardent invitation to John Muir. Of one of the storms of the Sierra he writes1: "It was easy to see that only a small part of the rain reached the ground in the form of drops. Most of it was thrashed into dusty spray, like that into which small waterfalls are divided when they dash on shelving rocks. Never have I seen water coining from the sky in denser or more passionate streams. The wind chased the spray forward in choking drifts, and compelled me again and again to seek shelter in the dell copses and back of large trees to rest and catch my breath. Wherever I went, on ridges or in hollows, enthusiastic water still flashed and gurgled about my ankles, recalling a wild winter flood in Yosemite when a hundred waterfalls came booming and chanting together and filled the grand valley with a sealike roar. "After drifting an hour or two in the lower woods, I set out for the summit of a hill 900 feet high, with a view to getting as near the heart of the storm as possible. In order to reach it I had to cross Dry Creek, a tributary of the Yuba that goes crawling along the base of the hill on the northwest. It was now a booming river as large as the Tuolumne at ordinary stages, its current brown with mining-mud, washed down from many a 'claim,' and mottled with sluice-boxes, fence-rails, and logs that had long lain above its reach. A slim footbridge stretched across it, now scarcely above the swollen current. Here I was glad to 'The Mountains of California, John Muir, p. 262-3. 12 linger, gazing and listening, while the storm was in its richest mood—the gray rain-flood above, the brown river-flood beneath. The language of the river was scarcely less enchanting than that of the wind and rain; the sublime overboom of the main bouncing exultant current, the swash and gurgle of the eddies, the keen dash and clash of heavy waves breaking against rocks, and the smooth, downy hush of shallow currents feeling their way through the willow thickets of the margin. And amid all this varied throng of sounds I heard the smothered bumping and rumbling of boulders on the bottom as they were shoving and rolling forward against one another in a wild rush, after having lain still for probably a hundred years or more." It is at the time of storm that the large work of erosion is done. The greatstorm of theyear may do more work than all the other storms of the year; and possibly the great storm of the century more work than all the other storms of the century. John Muir's explorations of the Sierra and in Alaska were done alone. He had no pack train; his entire outfit he carried on his back, a sack of bread and a package of tea for food (as long as they lasted), his scientific instruments and his note books, constituted his load; he had neither rod nor gun, usually no blanket, and seldom a tent except when chance threw him in with others. This means to those who have been in the mountains and on the glaciers that Muir was wet for days and nights, that, throughout many nights he was cold, that he was frequently hungry; yet to [13 1