Home > All Reminiscences of John Muir > 38 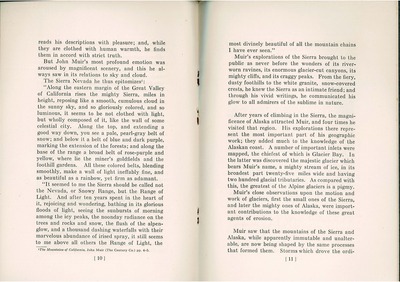 reads his descriptions with pleasure; and, while they are clothed with human warmth, he finds them in accord with strict truth. But John Muir's most profound emotion was aroused by magnificent scenery, and this he always saw in its relations to sky and cloud. The Sierra Nevada he thus epitomizes1: "Along the eastern margin of the Great Valley of California rises the mighty Sierra, miles in height, reposing like a smooth, cumulous cloud in the sunny sky, and so gloriously colored, and so luminous, it seems to be not clothed with light, but wholly composed of it, like the wall of some celestial city. Along the top, and extending a good way down, you see a pale, pearl-gray belt of snow; and below it a belt of blue and dark purple, marking the extension of the forests; and along the base of the range a broad belt of rose-purple and yellow, where lie the miner's goldfields and the foothill gardens. All these colored belts, blending smoothly, make a wall of light ineffably fine, and as beautiful as a rainbow, yet firm as adamant. "It seemed to me the Sierra should be called not the Nevada, or Snowy Range, but the Range of Light. And after ten years spent in the heart of it, rejoicing and wondering, bathing in its glorious floods of light, seeing the sunbursts of morning among the icy peaks, the noonday radiance on the trees and rocks and snow, the flush of the alpen- glow, and a thousand dashing waterfalls with their marvelous abundance of irised spray, it still seems to me above all others the Range of Light, the 'The Mountains of California, John Muir (The Century Co.) pp. 4—5. [10] most divinely beautiful of all the mountain chains I have ever seen." Muir's explorations of the Sierra brought to the public as never before the wonders of its river- worn ravines, its enormous glacier-cut canyons, its mighty cliffs, and its craggy peaks. From the fiery, dusty foothills to the white granite, snow-covered crests, he knew the Sierra as an intimate friend; and through his vivid writings, he communicated his glow to all admirers of the sublime in nature. After years of climbing in the Sierra, the magnificence of Alaska attracted Muir, and four times he visited that region. His explorations there represent the most important part of his geographic work; they added much to the knowledge of the Alaskan coast. A number of important inlets were mapped, the chiefest of which is Glacier Bay. In the latter was discovered the majestic glacier which bears Muir's name, a mighty stream of ice, in its broadest part twenty-five miles wide and having two hundred glacial tributaries. As compared with this, the greatest of the Alpine glaciers is a pigmy. Muir's close observations upon the motion and work of glaciers, first the small ones of the Sierra, and later the mighty ones of Alaska, were important contributions to the knowledge of these great agents of erosion. Muir saw that the mountains of the Sierra and Alaska, while apparently immutable and unalterable, are now being shaped by the same processes that formed them. Storms which drove the ordi- [111