Home > All Reminiscences of John Muir > 37 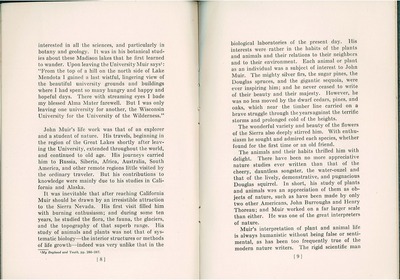 interested in all the sciences, and particularly in botany and geology. It was in his botanical studies about these Madison lakes that he first learned to wander. Upon leaving the University Muir says1: "From the top of a hill on the north side of Lake Mendota I gained a last wistful, lingering view of the beautiful university grounds and buildings where I had spent so many hungry and happy and hopeful days. There with streaming eyes I bade my blessed Alma Mater farewell. But I was only leaving one university for another, the Wisconsin University for the University of the Wilderness." John Muir's life work was that of an explorer and a student of nature. His travels, beginning in the region of the Great Lakes shortly after leaving the University, extended throughout the world, and continued to old age. His journeys carried him to Russia, Siberia, Africa, Australia, South America, and other remote regions little visited by the ordinary traveler. But his contributions to knowledge were mainly due to his studies in California and Alaska. It was inevitable that after reaching California Muir should be drawn by an irresistible attraction to the Sierra Nevada. His first visit filled him with burning enthusiasm; and during some ten years, he studied the flora, the fauna, the glaciers, and the topography of that superb range. His study of animals and plants was not that of systematic biology—the interior structures or methods of life growth—indeed was very unlike that in the 'My Boyhood and Youth, pp. 286-287. biological laboratories of the present day. His interests were rather in the habits of the plants and animals and their relations to their neighbors and to their environment. Each animal or plant as an individual was a subject of interest to John Muir. The mighty silver firs, the sugar pines, the Douglas spruces, and the gigantic sequoia, were ever inspiring him; and he never ceased to write of their beauty and their majesty. However, he was no less moved by the dwarf cedars, pines, and oaks, which near the timber line carried on a brave struggle through the years against the terrific storms and prolonged cold of the heights. The wonderful variety and beauty of the flowers of the Sierra also deeply stirred him. With enthusiasm he sought and admired each species, whether found for the first time or an old friend. The animals and their habits thrilled him with delight. There have been no more appreciative nature studies ever written than that of the cheery, dauntless songster, the water-ouzel and that of the lively, demonstrative, and pugnacious Douglas squirrel. In short, his study of plants and animals was an appreciation of them as objects of nature, such as have been made by only two other Americans, John Burroughs and Henry Thoreau; and Muir worked on a far larger scale than either. He was one of the great interpreters of nature. Muir's interpretation of plant and animal life is always humanistic without being false or sentimental, as has been too frequently true of the modern nature writers. The rigid scientific man [91